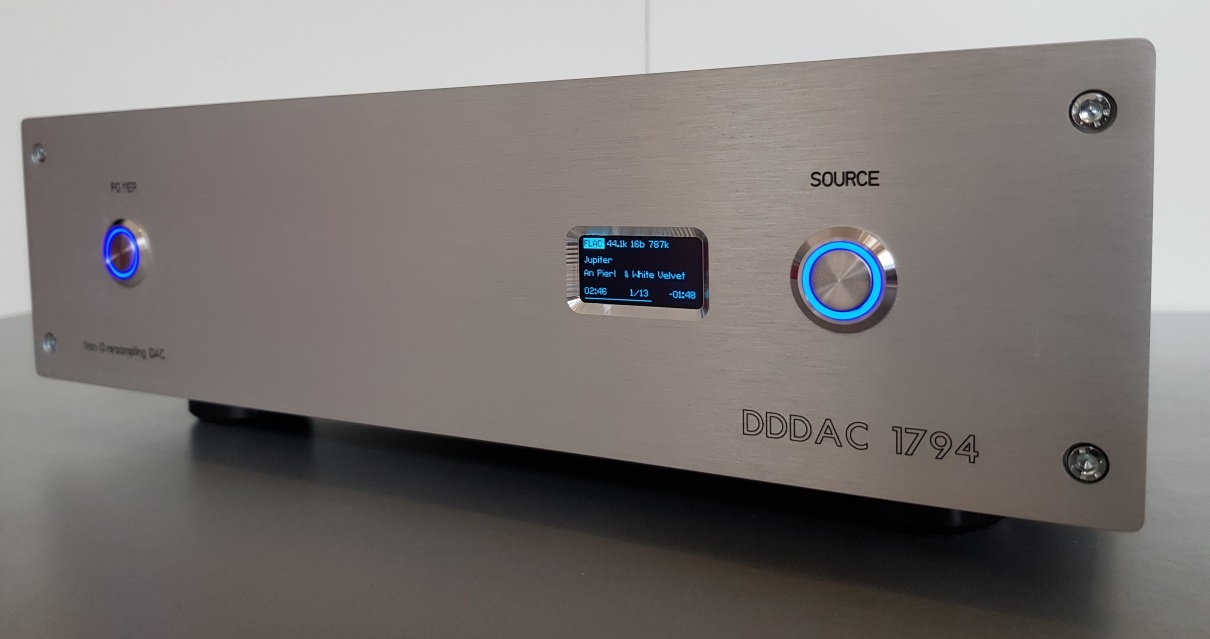 This article is about building my own version of the DDDAC 1794 NOS DIY dac. Designed by Doede Douma. The NOS stands for Non Over Sampling DAC, without any filtering.

Audio Creative has published some nice article about this DAC. They are also the official channel to for available DIY DDDAC 1794 kits.

You can start a DDDAC 1794 NOS build very basic and depending on your budget and time extend it in time. I started my build in 2017 and completed most at the beginning of 2018.

In its most basic form it contains:

In the most basic form only a SPDIF input is available. Other sources can be connected to an I2S input.

Specs of this build:

Special features of this build:

All schematic, drawings, tweaks etc can be found at my github repo dddac1794build.

Overview is provided by three diagrams:

The functional blocks of the system are:

The used electronics and connections are shown in the following diagram:

The exact connection between the modules are shown in the diagram below:

The remainder of the article provide more detail of some of the modules.

The DIY kits supplied by Audio Creative are beautiful kits. You directly see that PCB are high quality. SMD components are already mounted on the PCB, you only need to solder the through hole components your self.

It includes silver wire for connecting the DAC with the main board. The kit also include Dale resistors for the I/V conversion. If you like to use silver solder, you can buy also a small amount from Audio Creative. You can find the construction documentation and more also on the DDDAC page of Audio Creative.

Currently my system contains 2 DAC modules and have room left for a third DAC module.

For the Mainboard and DAC boards a stock DDDAC 12V PS kit is used.

The other components use 5V, but no DDDAC 5V PS kit is used for it. The 5V PS exists out of a clean 5V and a dirty 5V. The clean is used by the Hifiberry and the Allo Isolator (at least the clean part of the isolator). The dirty 5V by the Pi and other auxilary components. The 5V uses a toroidal transformer with secondary 2x6VAC, 30W. Followed by a dual DIYIHNK 4.17uV 5V/1A regulator. It uses a TPS7A4700 for regulation.

The Raspberry Pi is direct fed by the 5V dirty on the GPIO connector 5V, the USB PS connector is not used.

By the way both the Raspberry, HifiBerry and the Allo Isolator all have onboard 3.3V regulators that are used to fed the electronics onboard.

In my build there is no connection between the dirty and clean ground. Make sure that in that case you also have the mod for the clock select.

And finally settled with two Cinemag CLMI 600/600C to decouple the outputs. Both are nicely mounted to the side of the enclosure with a 3D printed mounted (Thanks Henk!).

The Raspberry Pi is in this system not only important as a I2S source for the DAC, but the Raspberry Pi also controls most of the auxiliary modules like the display and source selection.

You can see this back in use of the Raspberry expansion header:

The hardware is stacked as following:

The PiFace GPIO Shim makes it possible to breakout the GPIO and others pins, while continue stacking other boards.

Special attention is needed for letting the Allo Isolator and HifiBerry work together and still honor the separation between the dirty and clean 5V modules. See an other article for more details.

All GPIO interfacing including the power supply for the Pi connected to the PiFAC GPIO Shim.

Tested a lot of software distributions. Started with Rune Audio and currently Moode Audio 6.4.2 is used. It provides an easy to install system, a nice (web) GUI and is easy to mod.

It requires two configuration settings for make it work for this specific system:

First select the the HifiBerry Digi+ Pro as I2S device, which will require a reboot.

Second force to use 24 bit as output signal, source that aren’t 24 bit are converted. You can also provide a fixed upsample rate. See the article Selective Resample for an other interesting option.

Additional software for the display, source and soft power are handled in the previous paragraphs.

The chosen enclosure is a model of the Hifi2000 Galaxy line, the Galaxy Maggiorato GX388 330 x 280mm x 2HE 10mm front panel SILVER, including a Base Galaxy GX.

To see if everything fits the following floorplan is used.

For designing the front and pack panel I used Front Panel Designer from Schaeffer. Within this application you can directly see the cost of the design and place an order with Schaeffer. Also it provides nice renders of the panels.

I wanted the display a little bit sunken in the front, but not the full 10 mm. Therefore also on the back some material should be extruded to bring the display more to the front.

I am very satisfied with the end result:

The system has three sources:

Selecting the source is done with momentary switch next to the display. The switch is directly connected to the Raspberry Pi.

A short press will select the next source. If the Raspberry is selected a long press will pause or continue the current track.

The led current is to much for the Raspberry it self, the soft power down PCB contains a transistor to drive the led.

The relay module is also controlled by same daemon on the Raspberry Pi as for controlling the display. The module is mounted against the back panel of the enclosure.

The system contains a small display to show source information.

The display shows information about the Raspberry or the Digital Source (1 or 2):

If the Raspberry Pi is active the following information is show:

For controlling the display a daemon is running on the Pi. This daemon is written in Python and will work uses two libraries for the main functionality:

The daemon also contains the functionality to read the source button and control the led in the source button. Due using the MPD client library, you don’t have to integrate with Moode Audio itself. It will work on any MPD based or compatible audio player, even over the network if you want a separated display.

There is risk to corrupt the SD card of Raspberry Pi when it isn’t proper shutdown and I do power down my audio equipment when not in use, a solution is needed.

A software power down module is developed for this purpose. See the article Raspberry Soft Power Down for more information.

To give a clue about the number of parts and investment required hereby the list of my specific system.

The partlist can be downloaded at: