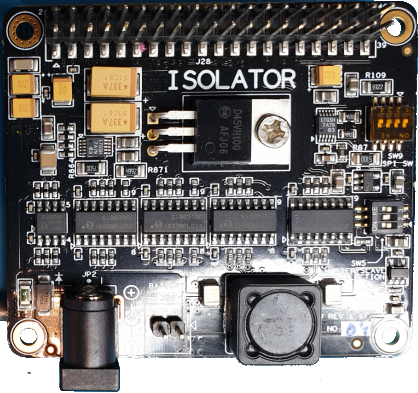 For quite some time I’m using the Allo Isolator for galvanic isolation between the Pi and the HifiBerry. Everything was upsampled to 192kHz and works great. No more cracks, deep dark sound.

Only when starting playing with different sample rates (44.1kHz based) MPD hangs. Before using the isolator it did work. If seems that something is wrong.

The HifiBerry Digi+ Pro has two crystals onboard; one for a multiplicity of 48kHz and one for multiplicity of 44.1kHz based sample rates. The crystal selection is done by using GPIO 5 & 6. Only GPIO 5 isn’t isolation by the Allo Isolator.

This can lead to two scenarios:

The image below illustrate the difference between GPIO6 (pin31) and GPIO5 (pin29).

Also not clear from the Isolator documentation is that the SPI isolating works different from the GPIO isolation; SPI isolation means no connection at all. Yes that is also isolated, but not usable.

For the clock selection we need an unused output pin. Below is an overview of how my system is using the Pi IO header.

Only the HifiBerry can’t be configured to use a different pin. We could rework the Allo Isolator in such way that GPIO 6 is using isolation electronics from GPIO16 (and disconnect GPIO16 from the Pi).

I choose a different approach, which only requires one electronical modification to the Isolator; break the connection between GPIO5 upper and lower connector of the Allo Isolator. The trick is that we will make software modification so that the HifiBerry software driver will use the already isolated GPIO16.

Isolated GPIO pin 5 from the Pi

First we have to make sure GPIO 5 (pin 29) is electrical isolated. On the bottom of the Isolator there is a via that connects GPIO5 from the bottom connector to the top connector. This via is connected with a very small trace going from to the solder pad of pin 29.

Just cut this trace with a small X-Acto knife or what ever for small knife you have. Probably you need to have some loupe of smartphone to see it clear enough, at least I did. You don’t need to remove the entire trace, just can scarf will do. Don’t forget to measure the connection between the upper and lower connector before and after to see if the cut is good enough.

Next we have to connect from the Isolator upper connector GPIO 16 (pin 36) to GPIO 5. You can solder a wire between solder pads of pin 36 and pin 29 and you are good to go.
Because my HifiBerry has the additional male header installed, I did have another choice available; Just connect a jumper wire from pin 36 to pin 29 on the HifiBerry upper connector. No soldering required.

Do you notice the connector in position P3? You can use this one to feed both the HifiBerry and the Isolator with clean 5V. In this way you can avoid the less available 6.5V for the Isolator. Both the HB and Isolator use own regulators for 3.3V, which what the actual chips are using.

Make the Pi use GPIO 16 for clock selection

Let the Pi HifiBerry driver use an other GPIO for the crystal selection is standard not available. To make this work we need to change the driver overlay a bit.

This involves the steps:

Luckily it isn’t hard to make a new overlay which allow to configure the used pins.
But you need to know a little about using the command line command of Linux. First login open a SSH session, for example with PuTTY.

Use the new overlay

If you aren’t familiar with how to edit the file on the Pi with SSH, just remove the SD card an put the card in your normal computer.

If you want to be sure and check if the overlay is correctly loaded else then by playing aa 44.1kHz based file run from the SSH console:

In the output the following lines should appear:

Update 2020-09-14:
In the article DDDAC1794 build is shown how the power supplies are connected. The Isolator isn’t fed with 6.5VDC. I use 2x times 5V(dirty + clean ) for it. The power supply for the Isolator is coming from the 5V connector on top of the Hifiberry. Therefor the extra regulator of the Isolator is bypassed and we can use a more common voltage of 5V.