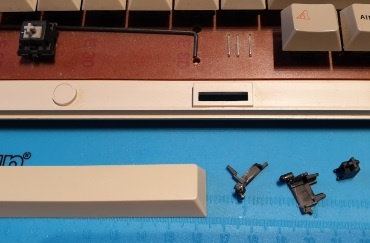 Some time ago I was offered a defective Amiga keyboard. It was Amiga 2000 Cherry Keyboard, one of the more rare Amiga 2000 keyboards. The previous owner informed me that the keyboard was not working at all.

Let’s see how far we can get the keyboard working again.

An inspection of the exterior:

After opening the case and inspecting the internals:

After some searching found that the PCB ID Cherry 601-1435 matches  with Amiga Commodore   G80-0879HAU (601-1435)  Cherry MX Black. It looks like that this keyboard is only used for the first batch of Amigas A2000A r4.x (the German design) from 86/87. The USA based sites find it a rare keyboard, but I think in Europe it isn’t because the A2000A is never sold in the states. Nice article can be found on AmigaLove.
On deskthority information and pictures are available.Based on one of that pictures:

It seems that the PCB from deskthority doesn’t have the brown pertinax PCB.

The connector is a 5-pin DIN plug. The pins are:

The keyboard controller is made out of one of the first Intel 8 bit micro controllers (MS48 family):

The good thing about this is; no special MOS chips involved. All later Amiga keyboards use a MOS keyboard controller. The P8049AH contains 2k ROM, it isn’t used and relies on an external EPROM for the program.

I’m not sure about it, but it looks that this keyboard PCB is produced by Cherry Germany and not Commodore. Cherry did use this controller logic with several of their other products. They used instead of P8049AH also P8039AH, which is the same model but without internal ROM. Are pin compatible and can de swapped. It is configured to use the external EPROM.

Based on the damage found, I think that the ground is floating and not connected to the PCB. The damage is related to relocated and resoldered (with to much heat?)  of the wire connected to shield carton. Lets first correct that by cleaning up add add a bridging wire and remove the shield wire.

Ok caps light will now turn on at startup, but further it is still dead.
Remove the bridge wire again and provide are more permanent solution;

If keyboard is working again restore the shield wire by an little bit more easy to handle wire and also solder it on an different location.

Next in line are the bad solder joints on pad/pins of the crystal. Not clearly visible in the image, but both pins are loose in solder joints. Just reflow the joints. To be sure measure the crystal is still working check it with the scope. And the answer is no. Maybe are the bad joints related to the mounting method, it hings on the legs and provide mechanical stress to the joints. The crystal will be replaced and will get little support of a drop soft (removable) glue.

Next I will check it the EPROM is this functioning. For this I need an ROM image to match it against. This ROM is part of the Mame emulator a2000kbd_g80_us device.
Size and checksums are provided:

This source did only provided the checksums, but not the ROM it self. The checksums are just fine for verify that the content of the ROM is still ok, but I like to also have the image itself. Luckily the site retroroms provides all Mame roms including the a2000kbd_g80_us.zip rom.First check if the ROM matches the checksums provided above. I use the hex editor HxD for such things.
Because the ICs on the keyboard PCB are soldered without sockets, I first have to desolder (so happy with my ZD-915 desoldering station !) the EPROM.

Now I can verify, using an old  programmer Leap EP-1 with Windows 98 SE, if the content of the EPROM matches the ROM image. And yes it does.

The EPROM checks out to be ok!

Instead of soldering it back, I decide to first solder an DIL socket back. Normally maybe not wise for keyboard to have ICs in sockets, but it makes future repair, checks and replacements easier. And this keyboard will get an easier life that the previous 30 years, therefore I trust that the IC will remain in its socket. And while busy with the iron lets give the other ICs also some shoes 😉

To be prepared see if I can get replacement parts, if needed.T he two 74xxxxx can be obtained from normal electronics stores.  The CPU and EPROM is different story. Luckily there is a company specialized in such parts and ask reasonable prices. This company is Slawmir in Poland (also present on ebay, use the filter “seller:slawmir” ).
An used P8039AH CPU and an ET 2716 EPROM will cost less then €5, lets order it for just in case we need it.

Lets check the traces again, this time not only optical but also with the multi-meter.
To make sure everything is tested correct a schematic of the electronics would help, I could not find it only.  Lets recreate an schematic with KiCad. The PCB is self and the MCS-48 Family User’s manual are used to create the scheme.
Is fairly basic setup:

The only tricky one is the reuse of the for lowest bits of P2 for both address and IO.

Now we have a schematic, additional I will also create the PCB layout with only component placement (no traces):

Both together make it very efficient to measure the connections without constant following the trace. And because the ICs already have sockets, let get the IC’s out to make the measurement even more easy and have no risk at damaging the old ICs.Just following the connection from pin to pin in the scheme to see if it works. Also check for double connections.

We start with measuring only the area where the control electronics are, not the connection of every Cherry MX switch. I only will follow a few of those just see if at least one switch and its connections are correct.
After measuring with the multimeter at least the A8 and A9 signal seems not connected to the EPROM.
Finally with an inspection with 8x zoom showed very thin crack in the upper layer of the underside of the PCB.The crack is spread over 6 traces, one affected (A10) is still working. Clearly I need some better tooling for visual inspection.

First quick fix is to temporary add some bridge wires for A8 and A9 to see if this is the last error to fix.
Boot with AmigaTestKit (formerly SysTest) And yes it works! Only the O and Z aren’t working, probably due the other broken traces (checked the switches).

Remove the coating from the damaged traces and cleanup with IPA and flux.

Then apply flux and with a very small soldering tip apply some tin on it. Steady hand required each trace is less then a 0.4 mm width.

And after soldering each broken trace all keys work again.Finish this with a strong lacquer to seal it.

Cleaning and put it back together again

Time to clean the enclosure and keys. All keys are removed and cleaned piece by pieces.

Now the keys are removed, you can seen that it are really double shot keys; no printed symbols, but used two different colors of plastic. This guarantees that the colors will not fade in time or use. Only the Amiga keys are an exception, those are still printed. All A2K,A3K,A4K keyboards that come after this model all have printed symbols.

Hmm I don’t like the way the spacebar is moving. It seems that one guidance of the stabilizer is broken.

Use some power glue to restore it and add some soft (removable) glue to outside to provide some support.

If that doesn’t work I can always order an original-cherry-2u-pcb-stabilizer.
Replace the missing foot rubbers by fresh new ones.

Due the clips of the enclosure closing and the the tight space for the keyboard cable, I use the following order for putting the enclosure back:

And the end result:

Because the schematic and PCB layout are created in KiCad, we also now have a nice render of the PCB. Including identification of the problems areas. Each of the three areas was enough to make the keyboard not work. This is the first I had to repair something with a triple error with the same effect; a dead keyboard.